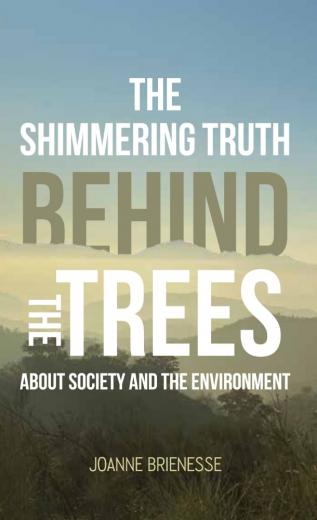 The Shimmering Truth Behind the Trees - About society and the environment

The Shimmering Truth Behind The Trees is a breathtaking dystopian book about the recklessness of people. It portrays a detailed insight in a life that could be our future. Two teenagers, Sabrina and James, struggle to survive in a world of economic inequality, stereotypical opinions, global warming and deforestation. Stories of daily life are told from different societal perspectives. As Sabrina had lost her mother in a tsunami, when she was young, her childhood hadn’t been easy. Nevertheless, she keeps hope doing her everything to pursue her environmental study in the hope to make a difference. As the mistakes of humanity become apparent, they feel more helpless. Will the controversial activists be able to help her reverse time?

She grabbed her black bag, which was always on the tiny kitchen table, ready to go, and made her way out of the ghostly village. If her house wasn’t on the edge of the village, it would have been gone already. Perhaps that was the only luck she had but, it certainly gave her a bit of faith in the universe. Rapidly, she climbed over the tree trunks, stopped for a small second, and continued to walk away from the place that she once called home. Sabrina didn’t have the courage to look back, knowing it would only cause her to become more emotional, after already being so attached to the area. It was likely, she would never return to the village that would turn into a hunted graveyard to remind humanity of their mistakes. There was no good in grieving the past as she knew nothing would change, people would continue to live just the way they did and even if they did finally decide to change, it wouldn’t make a difference to her. The villagers had adapted to the situation and the vulnerable living situation had become normal.

After some time, that felt like an eternity, she finally found a place that seemed safe from the burning hot lava. A few miles further from the disaster. She found herself on top of a mountain, where she was certain the lava wouldn’t reach, since it seemed to be going in a different direction. The place was peaceful, birds chirped quietly, and the tree leaves rustled in the calming breeze. She set up camp and put down her bag.

The Dutch Joanne Brienesse (2002) has spend part of her childhood in Asia. There, she has seen deforestation of the jungle for palm oil plantations and the connected forest fires in person. Here, her love for nature has continued to grow and the realization that we have to be careful with our Earth settled. She now lives in Spain, where her passion for the environment and writing has combined, to form this book. The Shimmering Truth Behind the Trees is her debut.