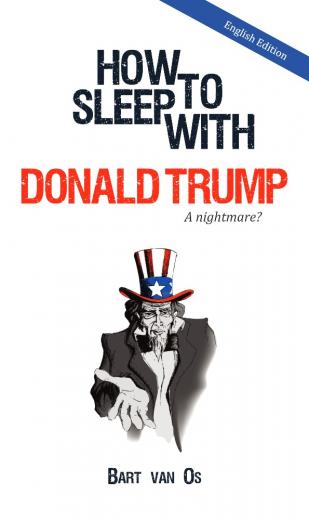 How to Sleep with Donald Trump - A nightmare?

Was it because of the Russians or was it just his popularity? No, it was because of Sally. Thanks to Sally, Donald Trump became president of the United States. Sally is an African-American woman of 71, although she prefers to call herself as a black, old bat, averse to any kind of political correctness. For her, Donald Trump was the hope for a better future. Her house was therefore a kind of ‘Trump museum’. But Sally also took care of her ex-mother-in-law, Elza (a difficult, black, old bat of 96), who was also her neighbor and demanded a lot of attention. Elza hates Trump and is sufferig from sleepless nights. Both women are sentensed to each other, during the heavy first months of Donald Trump in the White House!

Today she felt like she was arguing with everyone. Other people irritated her, were in her way, made too much noise, were just a little too cheerful, too sober or just too indifferent.
“Hell, that's the others,” Sartre once said and Sally couldn’t agree more. Sally was a seventy-one-year-old African-American woman, only she didn’t see herself that way. She was averse to politically correct terms. In her eyes she was just a black old person, just a little too chubby, with reddish grey hair, a round face with a mouth that was slightly too wide, with corners that had been drooping for years. At least, that was what she saw every morning when she looked in the mirror. All the other words for this were merely a patronizing term as a smoke screen against reality. No, a black old person, covered exactly what she was. And now there was a long line in the grocery store because this black, old person was having a discussion with the cashier.
“Madam, you gave me a twenty-dollar bill and no more!”
“You’re lying! I gave you a fifty note!”
“Madam, we could discuss this forever, but that would be pointless, and I have to help the other customers!”
“I don't care!” Sally snapped. “I gave you fifty bucks, so you have to give me thirty-two bucks in return.”
“Madam!”
“No, I'm not a retarded old person! And I won’t go away before you have given me those thirty-two bucks!”
Moans and murmurs sounded behind her and a customer even tapped on her shoulder.
“Miss, Miss,” a heated voice said behind her.
Sally turned around.
“Piss off will you, piss off!” the man said.
“Well look what we have here,” Sally said. “A Mexican! You think you can cut the line?”
“I am an American,” the man corrected her.
“Yes, but for how long. With our new president, you can go back to your home country again soon. There will be a wall, you know, a wall against people like you.”
Suddenly a woman jumped forward and joined the discussion.
“That wall is still far from being finished, and now hurry up because I have to pick up my daughter from school!”
“Oh, but that's not my problem.”
Meanwhile, the cashier had already helped three other customers before Sally turned around and gave him a withering look.
“You won’t see me here anymore!” She snapped and grabbed the three plastic bags which were filled to the brim. Sally felt the compassionate looks of other peo-ple when she trudged out of the grocery store. And if that wasn't bad enough, she almost walked into an advertising column, showing a wide-smiling Hillary Clinton with the text: “We are the future!”

The writer Bart van Os has given a personal face to the political dichotomy in the United States. He debuted in 2017 with his book, ‘The woman with the Yellow bag” (A mysterious ode to London). Also available from publisher ‘Boekscout’.