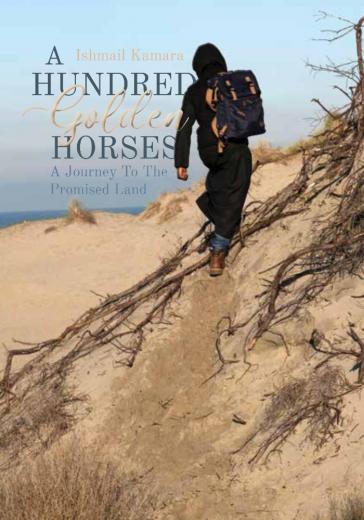 A Hundred Golden Horses - A Journey to the Promised Land

While he was a little boy, Eba Yoko was adopted by his Uncle who raised him. As an adolescent, in a crucial time, Eba was forced to join the army. After a few days of intensive military drills, he escaped the training camp and began an adventure to the Promised Land, striving to find a stolen treasure. During his journey, Eba falls into the hands of a human trafficker, who later facilitates their passage by Sea to the Promised Land. Even though he has finally made it, Eba is disappointed by his arrival. Lost in a foreign land, Eba undergoes another struggle to start a new life.

My jaw stiffened when I tried to speak so I sat in silence, my nose running with crystal-clear drops which tasted salty as they jellied on my upper lip. The wails and screams of the young children on-board were almost drowned out by the shouting of the adult passengers. People started to move around which caused the boat to become unsteady. The waves were getting bigger and the already dark sky was turning even darker. It looked like the night was falling in the middle of the day.
A huge wave slapped the boat violently which caused all of us to panic. We were dislodged from our positions and people fell onto each other. The captain didn’t speak but it ap-peared he had lost command of his boat. I saw him strug-gling with the handle of the outboard machine, desperately trying to keep the boat steady, but every attempt he made was defeated by the waves.
“No matter what happens just hold on and stick with me,” said Samir. He was soaked through and shivering uncontrol-lably. Samir and I were both speaking with heavy tongues as if we had been poisoned with raw caustic soda. The risk of the boat capsizing was clearly increasing. In my mind, I started saying a prayer to seek my uncle’s forgiveness, a moment which set me free and gave me hope. I had a fleet-ing thought, which brought me some comfort, that if I was going to drown I would leave this world and join my mother in heaven. When I raised my head from my prayers, I saw a giant wave ahead of the boat which the captain tried his utmost to navigate, but the only choice he had was to face it. The giant wave hit the boat ruthlessly and it almost capsized under its force. I heard cracking sounds as the gigantic nails came loose from the grip of the timber the Living Wood was built from. The chaos on-board made it look as if we were witnessing doomsday.

Ishmail Kamara was born in Mambolo Chiefdom, Northern Sierra Leone. In 2012, Ishmail fled Sierra Leone to the Netherlands where he later discovered his true talents as a performing poet, writer and inspirational speaker. During a difficult start in the Netherlands, Ishmail created a podium through sport and creative writing, inspiring many people. In 2016, Ishmail fulfilled his dream of becoming a football champion with amateur club Excelsior Maassluis after three seasons. After that triumph, he quit active football and pursued his other dream of becoming a full-time writer. As a performing poet, Ishmail became a new face after being described as the ‘Dream-rich poet’ in a local newspaper. Ishmail started conducting his famous City tour ‘My muse’ in Rotterdam West, which inspired his debut Smile, a collection of poems published in February 2018 in Wales, the United Kingdom. As a writer with a mission to change the world through telling stories that could have never been told, Ishmail pursues his writing dream and now arrives at his next stop with his first-ever novel, A Hundred Golden horses, A Journey To The Promised Land.