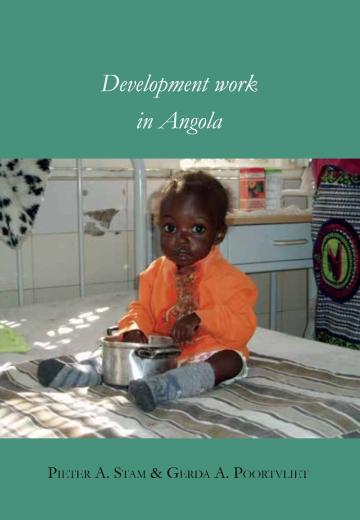 A development worker and his wife are being sent to Angola (1998 - 2001) during a period of peace, but soon the civil war starts up again and accordingly work has to be carried out under sometimes dangerous conditions.

Gerda tells of her work with the women’s groups of the Diocese and her daily activities at home.

Pieter writes about his work with Caritas Sumbe and his efforts to get the hospital Boa Entrada repaired. In 2005 the authors visit Angola for the first time after the war; and they see the results of their efforts.

Angola has suffered much during the colonial war with Portugal and in the following civil wars. It gained its independence in 1975 after a bloody war, which started in 1961 and which continued for about fifteen years. From 1975 onwards there was a conflict between the two former allies, which had together defeated the Portuguese; the MPLA (movement population to liberate Angola) and the UNITA (national union for independent Angola). This civil war ended when the UNITA leader J. Sawimbi was killed in 2002. This civil war is the reason why Angola is now a poor underdeveloped country, in which much has been destroyed.
The diocese of Sumbe was established in 1975. It consists of the coastal province Kwanza Sul, with an area of 55.000 km2, and with a population of about 1000.000 people (the Netherlands 41160 km2 and about 16.000.000 people). The Caritas organization of the diocese was set up in 1978. The diocese wanted to improve the health situation in the province Kwanza Sul. For that reason the heavily damaged hospital Boa Entrada was handed over by the government to the diocese. There was an understanding: the Catholic church would repair the hospital with the assistance of a foreign NGO (non-government organization). The hospital could then serve as a centre for healthcare for the surrounding districts. It was also stipulated that the church would work closely together with the Ministry of Health.
The diocese approached the organization Memisa with a proposal for assistance, which was approved. Te program started in February 1998, with the arrival of the family Stam in Angola. We, Pieter and Gerda, were send out by Memisa/Cordaid to implement the program. We remained in Sumbe from 1998 – 2001 in the service of the diocese of Sumbe. As development expert I was seconded to the Caritas organization with as objectives: 1) the rehabilitation of the hospital Boa Entrada, 2) strengthening the infra-structure of Caritas and 3) the coordination of the health program of the diocese. Gerda worked as a volunteer with women groups in Sumbe and gave lessons in the design and making of clothing. She also stimulated the implementation of small scale community projects.
The civil war erupted again in 1999 and accordingly the health program had to be terminated for security reasons. For that reason the program was not extended after the first three years. However there had been some progress. The hospital had been repaired and Caritas Sumbe had now the means to carry out her programs. Back in the Netherlands we looked into the possibility to carry on with the work in Sumbe for the following reasons: 1) to continue the pleasant working relationship with the diocese and 2) to finalize something which we had started, 3) to remain involved with Africa.
Church in Action ( the organization of the Protestant church of the Netherlands, to carry out missionary work), supported for years projects in Angola. In 2008 there was the intention to work more closely together with other religious groups. At the same time Church in Action welcomed initiatives of individual church congregations. The Protestant church of Kleverskerke (a little village in the province of Zeeland) presented a proposal to support the diocese of Sumbe through a small scale projects program. Several other church congregations in Zeeland wanted to participate in this effort in helping the Catholic church in Sumbe. The churches were informed regularly on the progress of the respective programs, through presentations, readings, folders and expositions.
It came about that people were interested to learn, how we had lived and worked in Angola. Especially Gerda had to answer many questions about our life from day to day in those surroundings. For that reason we decided to write this manuscript; some impressions about our daily experiences. There was disappointment but also satisfaction and laughter, the way it goes in life. A look in the life of a development family.

Pieter and Gerda Stam (1940, 1944) have worked for many years in Africa. First in Sudan, where he worked for the FAO and later in Angola for a diocese. Pieter Stam has worked his whole life in the tropics in many disciplines, and calls himself sometimes a petrol drum, which in the past was also used in the tropics for many purposes. The couple is living in Kleverskerke, Zeeland, The Netherlands since 2001.