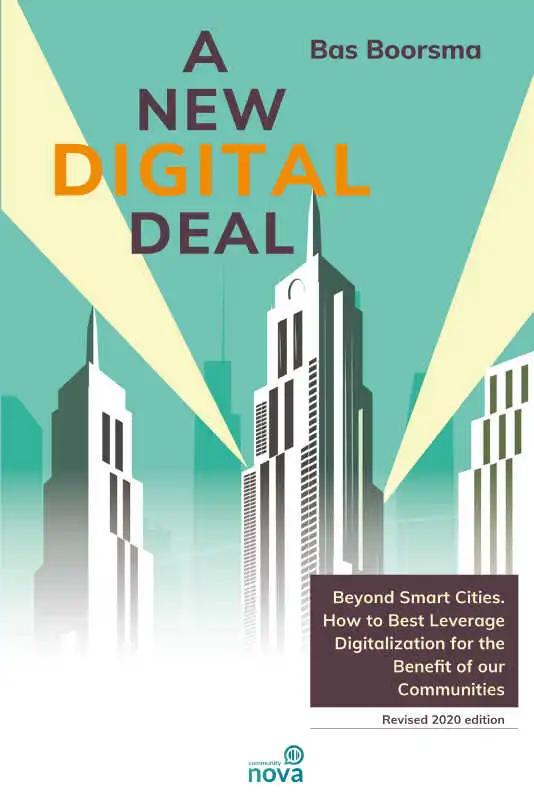 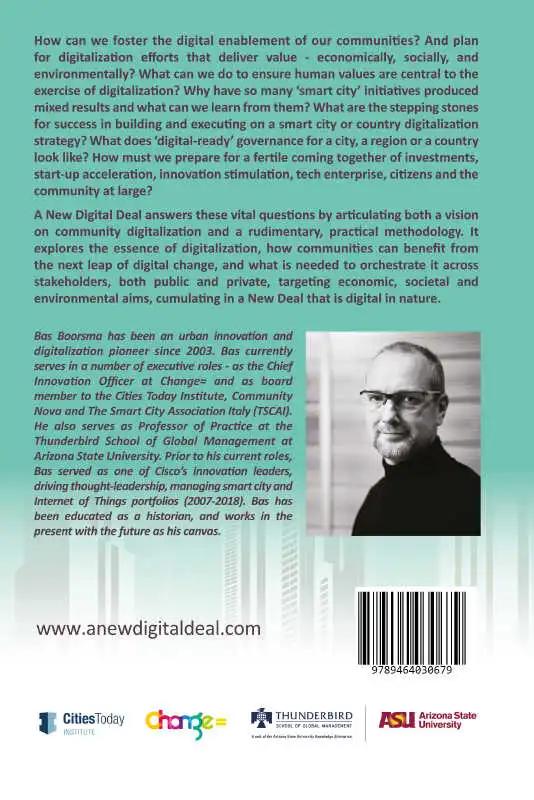 How can we foster the digital enablement of our communities? And plan for digitalization efforts that deliver value – economically, socially, and environmentally? What can we do to ensure human values are central to the exercise of digitalization? Why have so many ‘smart city’ initiatives produced mixed results and what can we learn from them? What are the stepping stones for success in building and executing on a smart city or country digitalization strategy? What does ‘digital-ready’ governance for a city, a region or a country look like? How must we prepare for a fertile coming together of investments, start-up acceleration, innovation stimulation, tech enterprise, citizens and the community at large?
A New Digital Deal answers these vital questions by articulating both a vision on community digitalization and a rudimentary, practical methodology. It explores the essence of digitalization, how communities can benefit from the next leap of digital change, and what is needed to orchestrate it across stakeholders, both public and private, targeting economic, societal and environmental aims, cumulating in a New Deal that is digital in nature.

Today, a New Digital Deal is needed more than ever. In the years and months between making the final edits to the first edition of A New Digital Deal and writing the foreword to this updated edition, some serious water has passed under the bridge: Big tech breaches to data privacy, governments using data against their own citizens, citizens pushing back against ever more technology in their streets, schools and workplace environments. It has been a sobering period, following so many years of virtually unbridled optimism about where digitalization would lead us and what that might mean for our cities, our communities. What these past few years have taught us, if anything, is that technology on its own cannot be expected to lead us to a safe future. We need to have a plan in place if we are to champion the journey. I call this plan a New Digital Deal.
Over the past few decades, many have come to believe that the phenomenon of ‘connectedness’ translates into new levels of individual and collective resilience – and with good reason. Digitalization has allowed for unprecedented access to information, education, care, jobs and entertainment. It has enabled better management of scarce resources, smarter mobility and effective collaborative modes of working. Indeed, digitalization has facilitated new modes of human conduct and adaptability.

Bas Boorsma has been active in the smart city space since 2003. He joined Cisco in 2007 as the company embarked in earnest on its community digitalization journey. He has taken up various global and regional roles at Cisco since, leading thought-leadership efforts, community digitalization and Internet of Things portfolios. Prior to joining Cisco, he founded and managed two companies, and led a global network of smart communities. Bas has been educated as a historian, and works in the present with the future as his canvas.