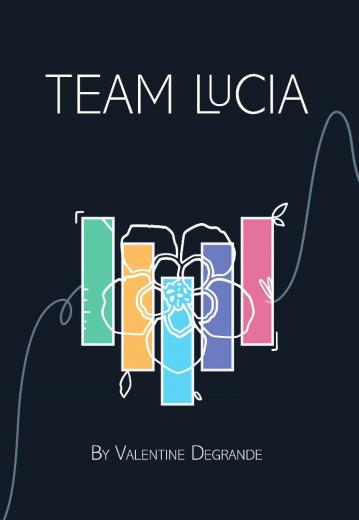 In the strict boarding school Saint-Lucia, five troubled teenagers meet. Jake, Olivia, Danny, Beth and Finn all have their own problems and secrets, but when they form a bond with each other, they realise there might be bigger obstacles ahead. Will they beat the odds? Or will the danger lurking around the corner be too much to handle?

Now I knew where he was. I was behind the corner, safely hidden as I spied on my English teacher. Mr. Brown entered the corridor and went straight for the main entrance of the school, where the parking lot was. As soon as he was out the door I ran as quietly as I could out of the door too and hid behind a car. That's when I noticed Mr. Brown and I weren't alone. There was a guy a few parking spots further away standing next to a car. He looked very formal, wearing a suit and tie and sunglasses. Mr. Brown handed him the bag and the guy stuffed it in the trunk of his car. They started talking but I was too far away to hear what they were saying. Jake's lip reading skills would have really come in handy now. I had to get closer. Saint Lucia didn't have that many teachers, so there weren't many cars, so there wasn't that much cover. This was going to be tricky. As quietly as possible I ran over to the nearest car. If I could get to the car standing three parking spaces away from the car where they were standing, I should be able to get to the car right next to them. I took a deep breath. This was where I could fail. I had to be fast. I ran to the car, dropped to the ground and rolled under it and kept on rolling until I was under the car right next to them. I could hear them now! They sounded angry, but they were keeping their voices down. That was when I realised they weren't speaking English. They were speaking a language I did not understand. I almost cursed out loud. Luckily, I did not, otherwise my position would have been compromised. Where was Olivia when you needed her? I gasped. Olivia! That was it. I struggled to get my phone out and meanwhile the guys where still talking, but as I pressed record I knew I was still going to get some information.

Valentine Degrande was born on July 2nd 2001 in Ghent. Since she was a child she has had great interest in reading and writing... In the lockdown that came with the recent coronavirus, she decided to put her passion to good use and entertain her friends in this difficult period. From this came forth her first book: Team Lucia.