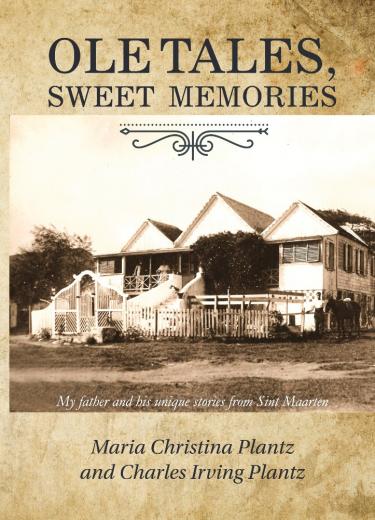 Ole tales, sweet memories - My father and his unique stories from Sint Maarten

“Bringing the stories together and delving into sweet memories of my humble, loving father was an emotional journey”. Maria Plantz contributes a short biography and further background for the reader.

‘The remarkable stories of Irving Plantz’, as they are referred to by Dr. Jos de Roo were found in the archives of Radio Nederland Wereldomroep. The stories compiled by Irving Plantz were phonetically written in ‘Sin Matin’ English and recorded and broadcast to the English speaking islands of the Netherlands Antilles between 1949 and 1952. This is a unique collection of 18 stories in the oral literature tradition of Sint Maarten.

Dr. Jos de Roo, who found the stories, contributes some elucidation based on the research for his thesis: ‘Praatjes voor de West’.

“What else did your father write?” The voice at the other end of the telephone line was gentle, soft spoken. It was Jos de Roo. He lives on Aruba but was temporarily in the Netherlands. He said that he made a great effort to find me. And now he had.
“Uh... he wrote a book about Taxation in the Netherlands Antilles, which is, or at least was, considered to be the handbook for taxadvisors...” This was the best answer I could give him. I don’t really think it was an answer he expected. Quickly Jos started to explain that he would like to know more about my father. He asked if we could meet. We agreed to meet at my office in Amsterdam.
Although it is not unusual that people want to know more about my father or grandfather, my curiosity was peaked. Always proud to talk about this lovely man, whom I still miss a lot since he passed away in 1987, I was eager to hear the reason for his interest. So, I gathered some documentation and pictures for the meeting.
I met this friendly, white haired gentleman, at my office. He was clearly retired, but also clearly very active and doing something that invigorated him. He told me was doing research at Radio Nederland Wereldomroep for his doctoral (Ph.D) thesis. Radio Nederland Wereldomroep was a kind of Dutch BBC with, at one time, ambitions for worldwide broadcasting. Time was of the essence, because in the larger scheme of things this broadcasting institute, which existed since 1947, was faced with serious subsidy cuts in 2011. The archives would partially be destroyed if no good home could be found for them. He explained this had grave consequences for the integrity of its archives, which he needed access to for his research. Hence his haste. In his thesis he intended to set out the influence of Radio Nederland Wereldomroep on the development of literature of the Caribbean countries of the Dutch Kingdom. So far, so good, but I still did not see the relevance or connection with my father.

Maria Plantz (1955) is the eldest daughter of Irving and his wife Elly. She took up the challenge to get the stories published to contribute to Sint Maarten’s culture and history, to describe the grand Sint Maarten roots and French Quarter tribe and the life of the man who wrote the stories in a contribution titled ‘A Humble Man’.

Charles Irving Plantz (1924-1987) was born on Sint Maarten into a large tribal family with deep roots in Sint Maarten society and history. As a true Caribbean he grew up on Sint Maarten, Bonaire, Aruba and Curacao. During his formative years from the age of 14 to 20 he attended Rolduc boarding school in Kerkrade, Limburg. He lived through the Second World War, an experience he did not talk about, but shared only once. After graduating in 1944 he went into hiding to avoid being sent to the German work camps. Whilst studying law at the University of Amsterdam he wrote the stories of ‘Ole Tales, Sweet Memories’ between 1949 and 1952 making use of his sweet memories and love for his ‘Island in the sun’, Sint Maarten.