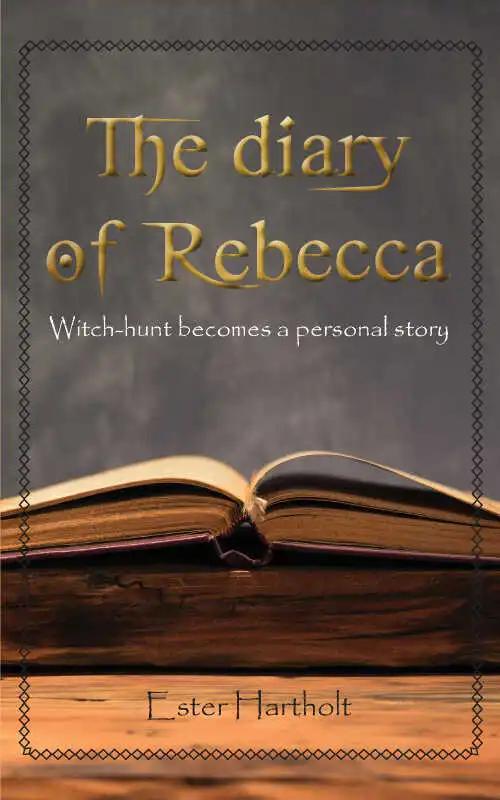 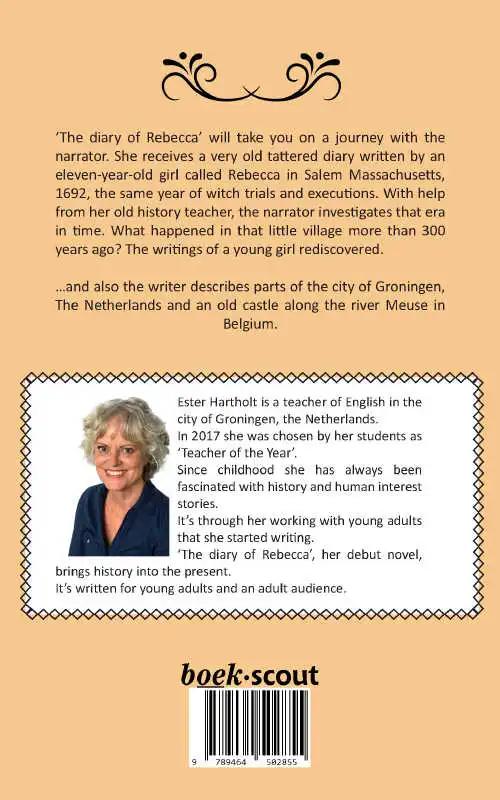 The diary of Rebecca - Witch-hunt becomes a personal story

‘The diary of Rebecca’ will take you on a journey with the narrator. She receives a very old tattered diary written by an eleven-year-old girl called Rebecca in Salem Massachusetts, 1692, the same year of witch trials and executions. With help from her old history teacher, the narrator investigates that era in time. What happened in that little village more than 300 years ago? The writings of a young girl rediscovered.

...and also the writer describes parts of the city of Groningen, The Netherlands and an old castle along the river Meuse in Belgium.

This book is written for both adults and young adults.

As I went down the stairs, I heard the door-bell ring twice. I opened the door and looked at the postman carrying a package. He had thin black hair tied up in a ponytail, deep brown eyes and pale skin. He always looked down while walking through the street but now he gave me a big smile and said en-thusiastically.
“I have a package for you that came all the way from the States.”
“Oh, I’ve waited for days. I am so happy it arrived. Thank you so much!” I said genuinely.
“You don’t have to thank me, it’s my job,” looking at his shoes again.
“I know but thank you anyway. Have a nice day.”
As I closed the door, too quickly to be polite, I could feel my hands tremble. It took me 15 minutes to open the package. Correction; it felt like 15 minutes. Lynn had taped the box as if what were inside was made of pure gold. And there it was; a small book with a distinct aroma in dark brown leather. The binding of the book was frayed, and I ran my right hand over its surface. I opened it care-fully and inhaled a sharp smell of the past.

Yesterday it was my birthday and I received this most beautiful diary from my father. I know he got it from the reverend because I heard him whisper it to my mother a week ago. I was born in 1681, so that makes me 11 years old.

I have a dog named Sam and a little brother named Denver . They are both very dear to me. I am some-times jealous of my brother because he is allowed to do more fun things than I, just because he is a boy and I don’t think that is fair. I will never say that to anyone, only to my diary because otherwise I get punished. My father doesn’t beat us but I know that most fathers in the village do. I even saw it once when I was at Ann’s, one of my best friends, but I will not write about that because it is too frighten-ing. I did go to reading school and because I finished the work before the others, Elizabeth taught me how to write at the back of the classroom. I know that mother and father love us both but I don’t think it’s fair that I am not allowed to go to grammar school and Denver is. Mother told me that those are the rules and I have to obey them. Besides, I don’t like to make trouble.

Today is an exciting day because the men in the village are starting to build a barn for our neigh-bours. Father is already there to help. Four weeks ago they helped build a bigger work-shed for him. My father is the only carpenter in the area. Because of the amount of work he has to do for everyone, he needed more space for a larger sawing bench and all his tools. I cannot wait to go there and watch the men raise the first beams after I’ve done my chores. I hope that helping mother with the cooking and washing will not take up the whole day. I know mother will not mind me weeding the garden and finishing spinning the wool afterwards.

We live in a cottage near the end of a sandy road, which leads to the meeting house. Mostly it is quiet except for market days and when they take cows and sheep on their way to Salem Town.
Behind us is a small farm that has horses, carriages and a bigger vegetable garden than ours. Almost next to us live Rachel and her brother; she makes willow baskets and he helps all the farmers in the village. Their parents and two older sisters died of smallpox when they were about my age. Writing about it makes me sad but I know that father goes there a lot and mother brings vegetables from our garden now and then.
The blacksmith lives further away near Hadlock bridge. I’m glad because he makes so much noise hammering metal which starts before the rooster crows.

Ester Hartholt is a teacher of English in the city of Groningen, the Netherlands.
In 2017 she was chosen by her students as ‘Teacher of the Year’. Since childhood she has always been fascinated with history and human interest stories.
It’s through her working with young adults that she started writing.
‘The diary of Rebecca’, her debut novel, brings history into the present.
It’s written for young adults and an adult audience.