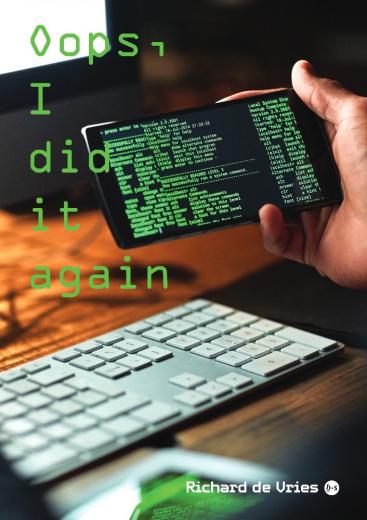 Oops, I did it again - The ongoing quest to catch a cybercriminal

While looking out the window, Carl discovers something interesting. Something that can change his and Jennifer’s lives altogether. While studying for his exams, he conceives a brilliant idea. Discreetly, he drafts a plan. Will he achieve his goal and make his girlfriend happy when the plan is successfully executed? Or will someone intervene? The danger of a cybercriminal can come from anywhere, and they can wreak havoc when they strike successfully. Are you prepared for when chaos strikes?

The evacuation bell starts ringing, and all the security gates open automatically. The trapped IT engineers are no longer trapped. Recalling the evacuation drills, they walk quickly toward the designated spots outside the building. The department and team heads are checking to see whether all their staff are accounted for.

The building is now completely vacant except for the security staff in the lobby. But their security badges aren’t working anymore either.

One security door didn’t open once the evacuation alarm started ringing. Behind that door is the vault containing all the physical keys to open any door in the building.

The CCTV system is actively checking to make sure the building is really empty. A small, but extremely handy feature of the attack script. Once the script detects that the entire building is empty, it initiates another function: “LockDownBuilding”.

The evacuation alarm stops ringing, and all security doors are closed and re-armed. Simultaneously, all security badges are rendered useless because the current access codes have been wiped and changed.

Mike and Jan are completely unaware that the attack script has executed its final command: “InitiateReset”. This function will reset and reinstall all systems, wiping out any evidence stored on-disk and in volatile memory. This is possible because the IT engineering department forgot to change the default password for each physical device’s management interface, and security was not authorized to scan the management interface network because the network engineers feared it could create a security hole in the network. The only challenging part is the central network storage. Rebuilding the RAID array with random drive assignment should do the trick.

Because of safety regulations and compliance standards, all the security doors on the ground level are extra reinforced. Some serious force is required to open them. This also applies to the door of the room where the physical keys are located. Mike already called the fire brigade to open the doors.

Throughout his career, Richard de Vries (1975) has been a truly passionate security professional. By sharing his gained experience and wisdom through non-technical stories, he hopes to create a world that is a little bit less vulnerable to cybersecurity attacks. Some of these stories can affect your life as well.