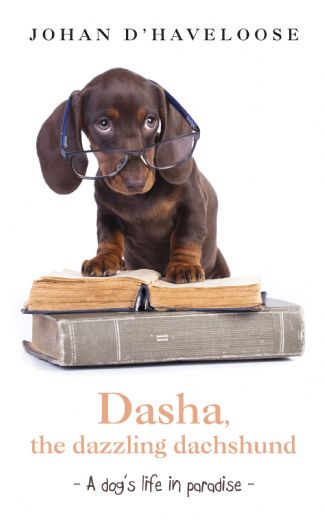 Dasha, an intelligent dachsund, ends up in new cultural environment and describes in 18 delicate chapters its views on its new family, friends and life in general. Dasha does that tongue in cheek and with caring hugs of empathy galore.
A positive breeze in today’s grim intercultural environment. A must-read!

"So funny, it made my day!"
(Reza Niroomand, Iranian IT consultant)

Now, the distance around the block is some 800 meters roughly. But for a puppy like me it is a respectable distance. Moreover walking on a lead for the first time, a double one at that, is like participating in the Tour de France when you’ve just heard the word bicycle for the first time. On top of that, Zita who by comparison already won the Tour, the Giro and the Vuelta in the same year, seized the opportunity to take revenge on my bullying her in the living room. She set off with such a pace that I literally skydived to follow her. Well, I had little choice, we were connected as Siamese twins, and even though you take less wind (another cyclist term) behind Zita’s broad buttocks, for someone who is used to making her own decisions, this was far from fun.

"I am a retired lecturer in English and Intercultural Communication. I live in a rural environment with my wife and two dogs. The grandchildren, friends and young little students offer a fantastic source of inspiration for my writing... and for a satisfying life, come to think of it."