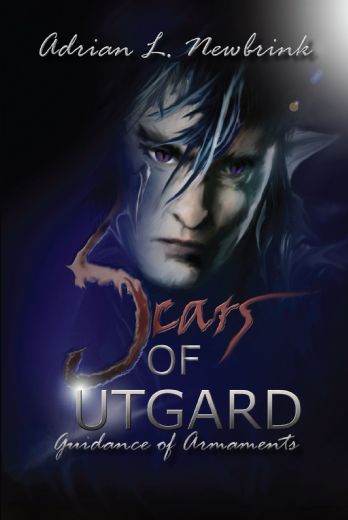 Scars of Utgard - Guidance of Armaments

It has been 300 years since the end of Ragnarok, the war between Angels and Demons, 50 years since the War of the Frozen Woods, and eight months since the Battle over Godhood. Life has continued its natural course since the end of the final battle, but as is prone to happen, conflict is never far away. As is the case when a group of Demons discover another sentient weapon that had been left behind at the battle’s end, and now they seek to use it tip the world’s scale in favor of Utgard…

Sheila did not question the sincerity of Sieg’s words, because she knew very well that he was much kinder to her than any of his allies. And despite how she knew that Utgardians could not be trusted, even by other Utgardians, she wanted to believe that Sieg really did care.
She worried at her lip, as she turned away from him, before she said: "…th-they will… u-use me… t-to…"
When she stopped halfway through her sentence, Sieg waited for her to continue silently. But when she refused to speak for almost a minute, he finally decided to question it. "…’to… what’?"
"…to… to power the weapon…" Sheila choked out. "I… I know they’ll… k-kill me…"
What happened next, was something that Sheila had not been expecting; Sieg lightly hit her upside her head, and though it did not hurt much, it was still unexpected enough that she let out a small yelp of surprise. When she looked up, Sieg’s expression was solemn, but certainly not cold or uncaring.
"Oyoyoy… wha did I tell ya ‘fore we left?", said Sieg solemnly. "I ain’t gonna let ya get hurt. So wha makes ya think I’d let anyun kill ya?"
Sheila sniffled in response to the honesty, before she shuffled over to him and grabbed hold of his cloak with a hint of desperation. "Promise me…," she begged him softly. "Promise that you’ll stay close to me when we get inside…"
"Promise. Hrun’s honor", Sieg swore, once more tapping his fingers along his shoulders and head. "When we get inside, jus’ hold mah hand, ‘n’ I swear I won’t let ya go. Now c’mon," he added, a tad urgently as he held out his hand to her. "We gotta move or we’ll be spotted."

"Born in 1987, I spent a big part of my life writing and drawing, first more in the 'fan base', and then gradually into my own realms of make-believe. I love to create worlds that are different from that which we live in, and to share these worlds with people has always been my dream, and I hope you will all enjoy the world that I have created from the lore of old."