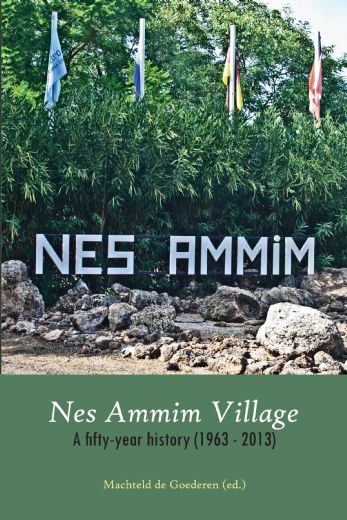 Nes Ammim Village describes the story of Nes Ammim, a non-missionary Christian village in the northern part of Israel, focuses on the period of time in which Nes Ammim established itself as a presence in Israel in ‘Lived Solidarity’ amongst Jewish kibbutzim and Arab settlements trying to survive economically through its various industries. Besides giving an account of the historical data as well as philosophical and theological considerations that were involved, this book also contains the stories of the pioneers as well as the personal experiences of a number of volunteers, Machteld de Goederen being one of them, through which the reader gets a taste of what life was like in the early days of Nes Ammim.

You don’t have to be crazy to work here, but if you are, it helps," goes the old joke, but in the case of Nes Ammim there’s more than a grain of truth in it. Over forty-five years, many slightly-crazy people - ‘meshoggenes’ as we called them - have lived in that village in the Western Galilee; more than a thousand people in total have worked there for long or short periods. Their lives have often been changed forever.

Beside her articles, Machteld de Goederen has undertaken the Herculean task of tracking down many photographs and stories from archives and personal collections, thereby digging up many faces and forgotten stories. As you leaf through the photo record, you pause – ‘Who is that now?’ It is a ‘Who is who’ of Nes Ammim. You see the pioneers at the foundation of the village, sitting in the old Arab bus with the Swiss flag; this bus is still shown to tourist groups, who are told the stories of the founders, and how it all began. Nobody could tell the stories as vividly and full of humour as Stijn Pilon, who lived the story of Nes Ammim for almost forty years after the death of her husband Johan, the organisational driver behind the original idea. Actually, Stijn could be described as an inspiring ‘missionary’. She had a mission to pass on the story of how it all came about, again and again. Above all, she told the story of why a new page must be turned in the dark history of the relationship between Christians and Jews.

Many faces, from the beginnings onward, pass before one’s eyes. It is a fraction of the story, because of course not everyone has been captured on film. If you look eagerly for yourself, but do not find, just be sure that you are somewhere in the background, among these strange people, these ‘meshoggenes’. For these people - ourselves, when younger - were indeed rather odd. Going to Israel for longer than a holiday did sometimes involve burning one’s boats, choosing an unconventional career and an uncertain future. They were idealists and adventurers, the inspired and the risk takers, devout Christians and those with doubts. But each brought with him a little bit of the material to make real the ‘sign’ that Nes Ammim wanted to be through the many centuries of anti-Judaism and anti-Semitism.

It was never a bed of roses on the hill of Nes Ammim. Many divisive issues from the history of the Church made their appearance again - usually briefly - but sometimes setting brother against brother. Many went home with wonderful memories, while others left the village frustrated or disillusioned. No part of the human experience was alien to the Nes Ammimers. For some, the village life was barren like a desert, while for many it was an oasis of genuine community.

Machteld de Goederen began her thirty years of volunteering in Nes Ammim with clearing stones and thistles from the newly acquired barren land while staying in the old school bus, its very first dwelling in the middle of nowhere. Having been so intimately involved with the village from the very beginning, she was the right person to bring about this kind of book, which she intended to be a tribute to the countless volunteers who helped build Nes Ammim and kept the Nes Ammim-Idea of ‘Lived Solidarity’ alive.