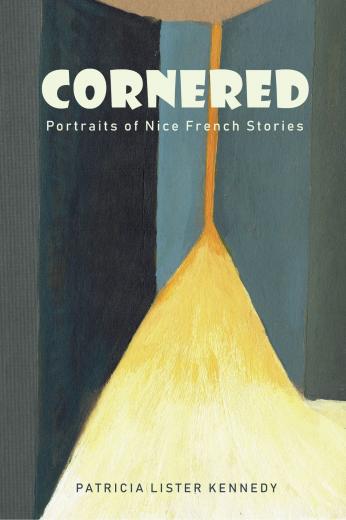 The main theme throughout the book is about how a woman can become trapped (cornered) from certain circumstances.
A portrait of a struggling artist (Julie) from her agonizing experiences can show to others (women) how one can be so easily taken and abused in this town of Nice.
The rest of the stories are of different characters that entwine with each other. All in all the general lifestyle and its mentality there.

Cornered in her small room he came closer and closer, until she couldn’t breathe. There was no escape now. She felt suffocated and at the same time, there was a deep hidden desire that needed to be explored.
[...]
Caged in and trembling like a frightened, fragile bird, she could only surrender to this brute, harassing her discreetly. Hypnotized under his spell, she was desperate, there was now no escape, it was too late. His charming manner playing lover boy, the true devil in disguise and she, the victim to this vampire.
[...]
The damage was done and there would be more to come, like ‘Faust’ selling his soul to the devil and flesh to be devoured. Julie felt she’d been had and full of regret, especially for his wife still, even though he was divorcing her.
[...]
“How can I escape?” she would often contemplate. Trapped and weakened Julie asked herself how can she get out of here?
[...]
Psychologically, he was breaking her down with his cruelty and finding out what could hurt her the most.
“You are useless, and your paintings are rubbish, you can better throw them in the bin, seeing you can’t sell them,” terrifying her.
Then the next day coincidently, there was a small fire in her studio, where she stored most of the paintings in the loft. Half of them she lost up in smoke, a valuation of 8,000 euros.
[...]
There were so many squashed in too close to the light bulb. Her voice was not heard that day, as well as many other days that had been and were again to come.
[...]
There he was pushing her like a bully again, demanding like a spoilt child and determined to get his way.
Unlike each other, they were more like strangers at war.
She asked herself, “how could this be, is he more my enemy? Is this the man to be my assassin?”

Australian born, Patricia Lister Kennedy took the footsteps of her great uncle William Lister Lister, (a renowned artist of his time) and started travelling at a young age. She obtained her art degree with distinction in Amsterdam, and then continued to travel by working as an English teacher and artist. From painting portraits to poetry and now writing, she enjoys combining it all by telling her stories based on true life’s experiences.