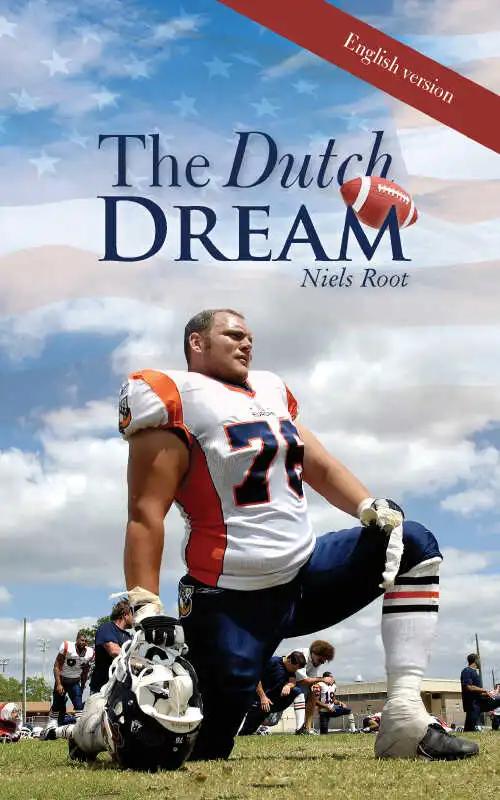 Five players, five stories, one dream: playing in the NFL. Five Dutch players made it this far: Harald Hasselbach, Romeo Bandison, Pascal Matla, Ricky Tjong-a-Tjoe and Geraldo Boldewijn. These five tell their story about the road to- and experiences in the NFL. Through honest and surprising full quote-interviews, they show us the spectacular as well as the dark side of the NFL. From a Super Bowl victory to a career ending injury, nothing is off the table. The Dutch Dream is the ultimate novel for a first-grade look into the epitome of American Football.

‘Winning the Super Bowl is without a shadow of a doubt the highlight of my career, especially the second championship. My role in the first Super Bowl final was pretty limited, but in next years final I played almost every play. I was a starter on the best team in the world. That gave me such a great feeling. What I can clearly remember is the feeling of walking through the player’s tunnel. It all felt so huge, so unreal. Not just because of the game, but also because I passed by the members of the rock band KISS. They were my childhood idols and they were performing during the pregame show. The fans, their passion, the enormous media attention, it was all so incredibly intense.’
‘The Super Bowl is the biggest one-day sporting event in the world and maybe even the second or third biggest sporting event all together. The atmosphere around the game is so incredible, it is simply indescribable. Journalists from all across the world interview you for days on end and they want to know everything about you. There are also networks that come to you for pieces that have nothing to do with the sport. For example, Comedy Network wanted me to bench press their reporter. Really silly sidepieces, but it is part of the game. They show the human, lighter side of the Super Bowl and the players. Again, it is all so indescribable. There is already enough intensity around the regular season games, but it gets taken to a whole other level at the Super Bowl.’
‘Does the president really take a day off? He might do so, but I can’t say that for sure. I know he watches the game live and calls both head coaches and the quarterbacks before the game to wish them luck. But if the White House actually closes...that would be something. You could say that America stands still on that day. They don’t call it Super Bowl Sunday for nothing.’

Niels Root was born in Amsterdam in 1978 and has been crazy about sports all of his life. This was what made him go study Sports Journalism in Utrecht. He came in contact with the Amsterdam Admirals in 1995 and has been hooked on American Football ever since. He and many other fans follow the NFL closely. In ‘The Dutch Dream’ Root combines five stories with his passion for sports interviews and American Football.