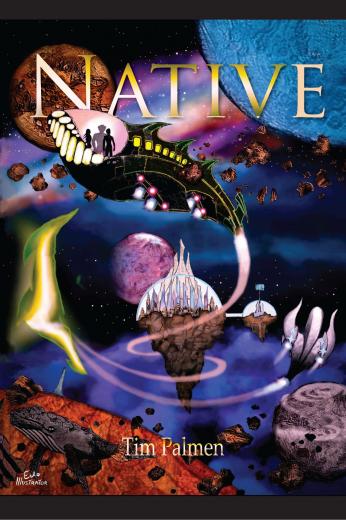 B’ork the Halikarnassian was having a good day: trying to get some food after a day of hauling rocks on Halikarnassus (a place best described as the dullest planet in the Universe, if anybody had only heard of it) was considered as having a good day, indeed. But just one unexpected crash-landing later and B’ork suddenly finds himself chased throughout the far stretches of the Universe by a bunch of vicious yet legal killers who want to extract information from his living brain (most definitely), monstrous tentacled beings from Beyond who want to rip his face off (probably) and, last but not least, another vicious and bloodthirsty killer who merely wants him to shut up and seems to be on his side (possibly). Now the chase is on: B’ork has the chance of a lifetime to see the Galaxy, to explore new and exciting places and, above all, to live another day. That is, if he doesn’t say anything that will guarantee someone shooting him in the face.

'Of course you have a choice in the matter, so let me know if you decide not to join us of your own free will. Nobody can accuse me of press-ganging,’ she said sweetly.
‘Err... what happens should I decide I’m not going to join you of my own free will?’
‘In that case you will be shot in the face. Repeatedly. As I said: no witnesses. Just say the word.’ She pulled a gun and held it casually in her hand.
The reason why she didn’t immediately shoot the only witness to their presence was due to the causality of the Multiverse: everything that can happen, happens somewhere in the vast number of parallel universes. So in millions of Universes the Captain did indeed shoot B’ork in the face. In millions of Universes she only shot him in the heart. In a million others, she had him keelhauled, maimed, drawn, quartered, burned, incinerated, vaporized, de-moleculized, dematerialised, dematerialised along with the rest of the population, beheaded, blinded, disembowelled and ground to a bloody pulp. In millions of Universes, the Omega had landed on B’ork’s head to begin with. In one theoretical Universe, the Captain killed B’ork, conquered Halikarnassus and then set up a small vegetable shop. But in order for all those Universes to exist, there had to be one where the Captain didn’t kill him. Luckily for the reader, this happened to be exactly that one existing Universe.
B’ork swallowed. The inside of the bolt gun’s barrel seemed deeper than the outside suggested. B’ork thought he could see the tip of the projectile, for now safely locked in its position. He thought about the Captain's offer.
‘Oh. In that case, I guess I’m in.’
‘Good choice, native. Welcome to the crew,’ she added while she turned around and headed towards the Omega’s loading ramp.
The stalagmite nodded. For B’ork, who thought that life definitely seemed to become a whole lot more interesting, the world went dark as he was hit hard on the back of the head.

After roaming and wandering Western Europe for a few years, Tim Palmen (born 1980) currently lives in and around the city of Maastricht where he divides his time between his girlfriend Liza, growing their own food and yelling at his laptop while writing stories out of spite. He holds no job, has no money nor does he have the slightest interest in getting either since that would result in him having to do things he doesn’t like to do (such as doing things someone else tells him to do in exchange for pieces of paper which he would probably only use to buy food with). Besides, it would keep him from doing the things he does like to do (such as growing his own food, yelling at his laptop and writing stories out of spite). He is currently working on several more stories, some of which might eventually be finished one day.